On Aug. 9, 2020, accelerometers being used for a security project at Luna’s Atlanta office detected a magnitude 5.1 earthquake in Sparta, NC, USA.   Luna’s os7520 optical accelerometers buried in the soil just below the surface measured the earthquake’s vibration wave as it arrived in Atlanta approximately 2 minutes after the original quake:

The os7520 sensors combined with a HYPERION interrogator enable high-performance vibration monitoring. The all-optical sensors, which can measure vibrations from nearby footsteps to aircraft flying overhead, have no electrical connections and are entirely passive. Luna’s solution enables cost effective, time-synchronized monitoring of up to 128 sensors with a single interrogator over a range of many kilometers – opening the door to large scale vibration monitoring not achievable with any other technique. The vibration or seismic data shown above was acquired with the prototype system described in a previous blog.

The data captured by the Luna sensors correlates well with the other seismic readings from USGS geological stations in the vicinity: 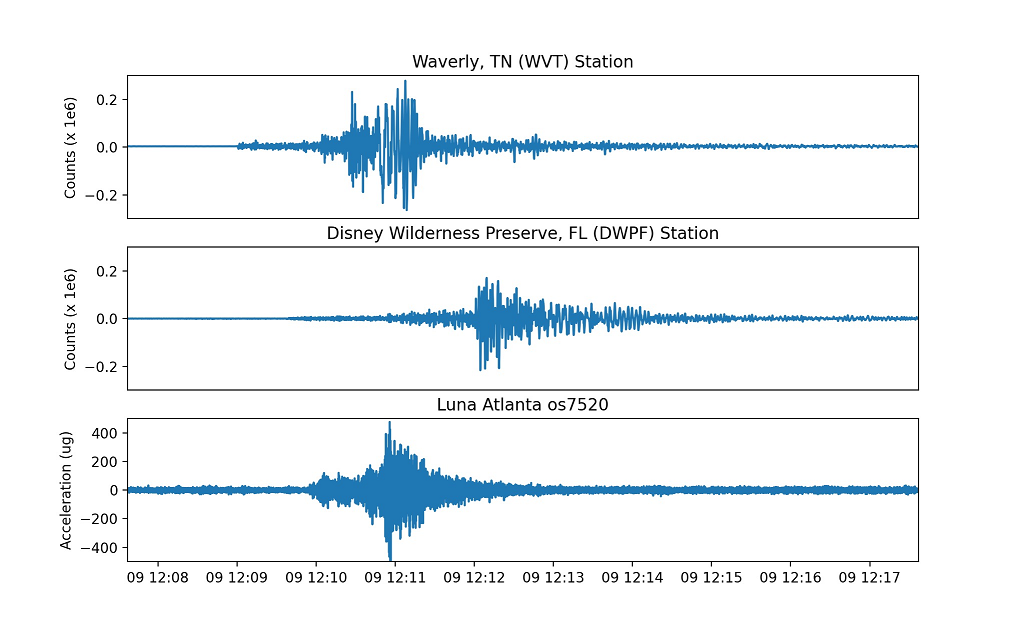 What’s interesting to note is that the data from the Luna accelerometer sensors was captured and retrieved despite multiple power and cellular outages in the area related to a regional storm, highlighting the ruggedness of the HYPERION and the cloud-connected monitoring system.   This result also highlights the exceptional performance of the os7520 vibration sensor, which can be used for wide-ranging applications, including perimeter and border security, structural monitoring, and both strong motion and long-range seismometry.

Contact us for more information on os7520 sensors, HYPERION, and the cloud-connected monitoring system, and various applications in vibration monitoring.