One of the most critical properties of a bottle or container is wall thickness.  Whether single layer or a multi-layer structure, the performance and quality of the container is very dependent on the layer thickness values.

The TeraMetrix T-Ray 5000 terahertz control unit (TCU) and an Online EPG Sensor Head have demonstrated the ability to measure the thickness of both single layer and all the individual layers in a multi-layer sample.  The measurements are collected very quickly (1000/second) and repeatably (< ±0.5 µm or better (±2σ) resulting in Cpk values typically > 7). Thus, showing one more application for which the terahertz sensors can be used for industrial process control, quality control, and non-destructive testing.

A three-layer bottle, conveyed past the sensor at a rate of forty (40) feet/min, was measured on a blow molding production line to demonstrate thickness measurement and other detection capabilities. 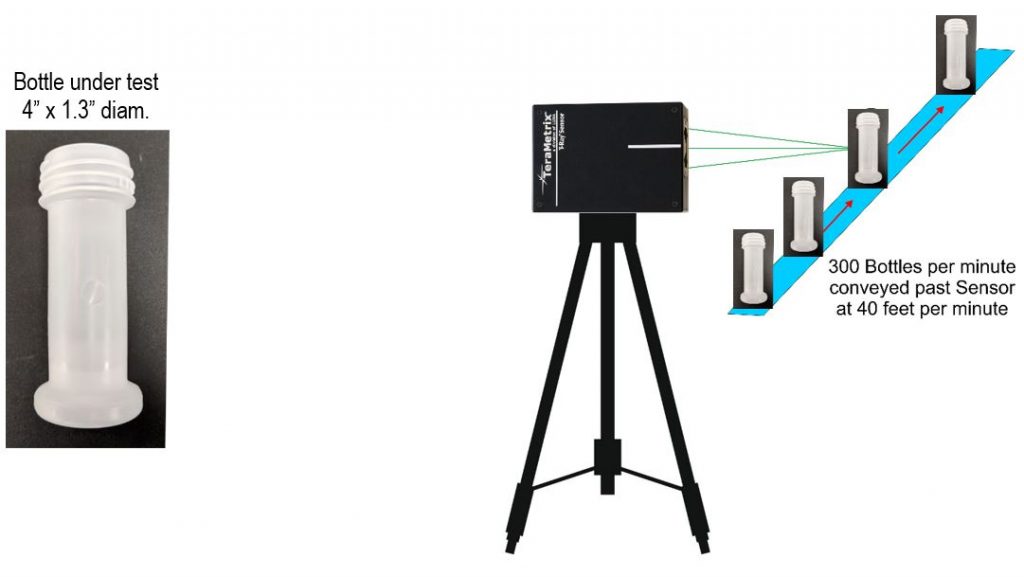 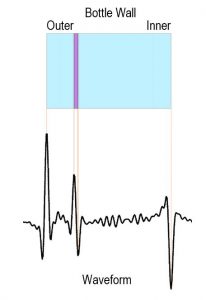 Because THz operates in a simple non-contact reflection configuration, it is straightforward to set up a sensor to make on-line measurements.  In this case, the sensor was set on a stand outside the production area to make measurements of finished bottles being conveyed past the inspection point.  The maximum inspection rate was 300 bottles per minute.  Thickness results at a single height on bottles were collected.

The bottle being manufactured has three major layers (up to six or seven layers total):

Over the 3+ hour trial period, the stationary THz sensor was able to collect > 30,000 measurements on production bottles.

The THz online measurements recorded the thickness variations within in each layer. 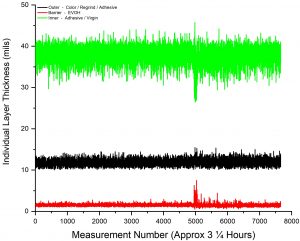 The level of variation in the results were reinforced with two other sets of data:

A B-Scan is an image of a cross section image of the bottle wall along a scan line.  For this example, the scan line is the circumference around the bottle at the height of the online THz measurements.  The image demonstrates variations in layer thickness within a single bottle.

The greyscale and intensity of the lines in the image correspond to the polarity and amplitude of the reflection peaks in the waveforms along the scan line.  The Y-axis of the B-Scan is time of the waveform features which corresponds to depth into the bottle wall.

From the image, the cross section of the bottle wall layers can be seen.

In addition to thickness variation, additional features such as potential gaps in the center layer can be seen. 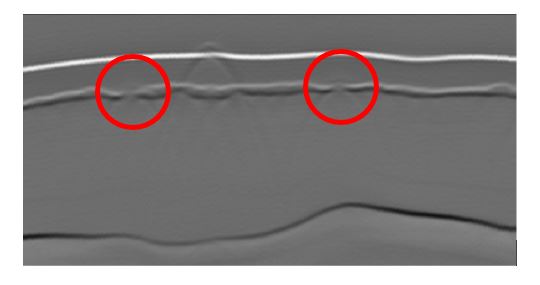 The other set of information confirming the online THz measurements are the standard factory destructive QC checks.  Four (4) QC samples were collected during the trial, and four additional samples after the THz trial was complete (thus 8 measurements all together).  The thickness of all the layers in the sample were measured.  Adding these results to the THz data plots confirm that the on-line THz measurements fit within the at-line QC measurement results.

The higher density of THz results, versus the current standard QC checks, better defines the current manufacturing conditions.  The results identify periods of product changeover, out of specification operation, defects within layers, and the product variation during routine production.

For functional layers, such as the EVOH Barrier layer in these bottles, it is crucial to ensure the layer is present and has the proper thickness value.   Such on-line monitoring easily provides layer thickness, and other layer information, thus helping ensure high product quality.